What is a pronoun? It’s one of the eight parts of speech! Keep reading to learn about personal pronouns.

I hope that chimp doesn’t want to kiss me.

The pronouns I  and me indicate the speaker, so these are first person pronouns.

You can’t imagine how strong chimps are.

This example uses a second person pronoun, as it indicates the person being addressed by using you.

In this example, she and them refer to Jane Goodall and chimps, respectively. She is singular, as it indicates the sole Jane Goodall, and them is plural, as it refers to multiple chimps. These are third person pronouns.

A Discussion of the Singular “They”

For centuries, people have used they and them as singular pronouns. Many people do this when they don’t know the gender of the person about whom they are speaking or writing.

The doctor performed emergency surgery in the morning, and they checked on their intensive care patients in the afternoon.

Though it was, and still is, incredibly common to use they in this way, it was considered grammatically incorrect by grammar sticklers until recently. That changed in 2019 when Merriam-Webster added an entry for they as a singular, gender-neutral third person pronoun. Included in this new definition is the pronoun for a person whose gender identity is nonbinary.

This is my friend, Grant. They are a doctor.

In this example, Grant’s gender identity is nonbinary, so the speaker uses their preferred pronoun they. 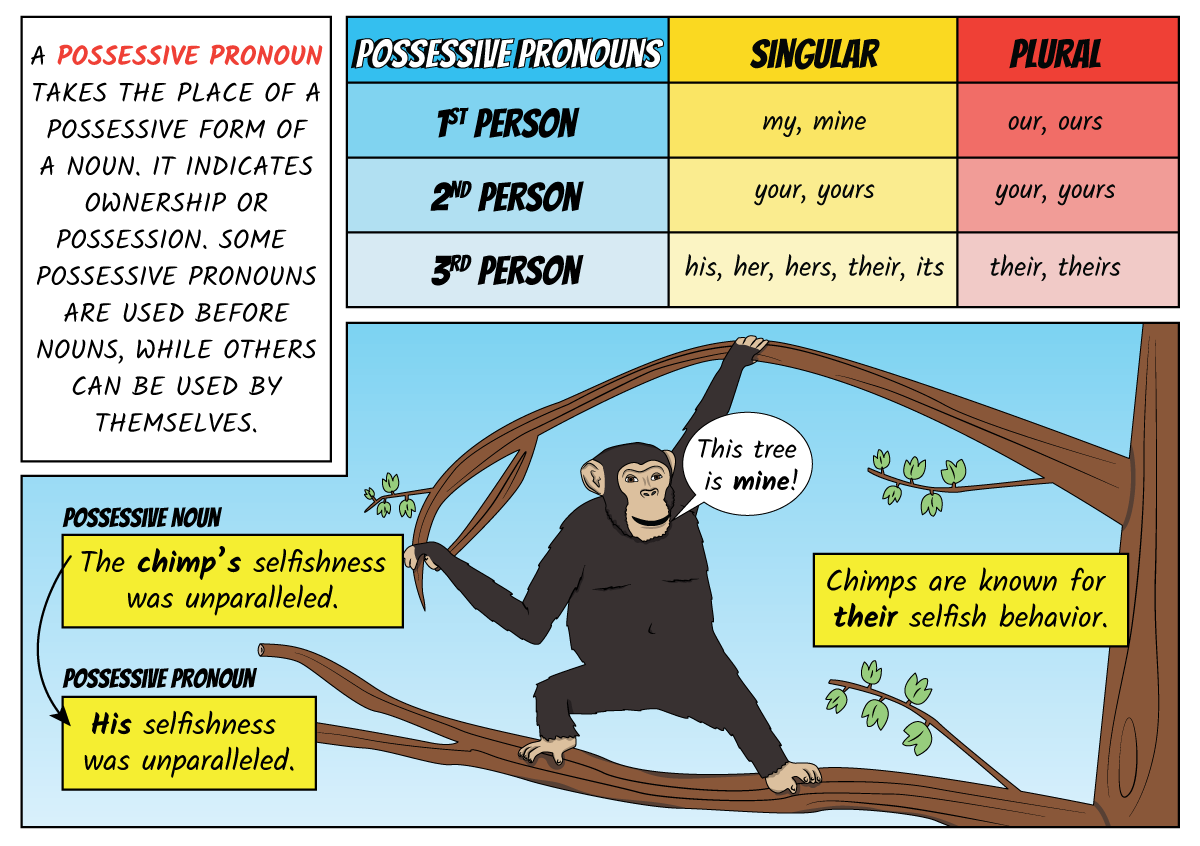 In the example above, the possessive noun chimp’s is replaced by the possessive pronoun his. Both are used to indicate ownership of selfishness. (Chimps tend to be that way.)

Additionally, the possessive pronoun mine is used without a noun, but it tells us that the chimp is claiming ownership of the tree.

Finally, the plural their is used to indicate that all chimps possess selfishness.

Need a refresher on pronouns? Check out this quick review!

Adapted from the Parts of Speech Review Review & Notes Presentation

Hey, ELA Teachers! Check out the classroom resources for parts of speech and other ELA concepts at the Super ELA! Teachers Pay Teachers store.

You may use the images on this site for educational purposes as long as you credit Super ELA! as the author.

You may not alter or sell these products on a different server. Reproduction of this product—in whole or in part—for commercial sale is strictly prohibited.

Super ELA! is social! Pin helpful resources on Pinterest or keep up with the latest news on Instagram.

Thank you for visiting Super ELA!

Do you love the free comics, animations, and printer-friendly handouts? Show your love with a cup of coffee!